skip to main | skip to sidebar

We lost a giant in comics today.

Dick Giordano hired me during mid semester of my first year at art school in 1983.
I remember it like it was yesterday. I got a call in my dorms that a "Mr. Giordano was calling from NYC".
I was living in Sarasota, FL at the time.

I ran to the dorm's community phone booth, and on the other end, " Hi Rafael, this is Dick Giordano and I'd like to welcome you to the DC family!"

I felt like Superman walking out of that booth - changed my life.

He and Pat Bastienne were always the best to me. Always took the time to guide me and Dick's slick inks really made my work shine- fixed all my rookie mistakes on those Firestorm covers.

My condolences to Pat and to Mr. Giordano's family.

You can read her interview with me here.
Posted by Rafael Kayanan at 8:08 PM No comments:

Got my Alter Ego 92 comps in from TwoMorrows.
As always, first rate articles of creators and their work edited by Roy Thomas.
Old Gulacy Elric pic was a highlight for me.
They should be in shops now.
Posted by Rafael Kayanan at 9:03 AM 1 comment:

Posted some Conan The Adventurer pages today and was really surprised at the fast response from so many fine folks! Thanks everyone!

Posted by Rafael Kayanan at 1:28 PM No comments:

Blast from the past. A panel from the RED NAILS sequel in Savage Sword of Conan circa 1993.
Posted by Rafael Kayanan at 5:42 PM 1 comment:

Posted by Rafael Kayanan at 3:53 PM No comments:

DRAW ME NOT IN HASTE

Posted by Rafael Kayanan at 9:08 PM No comments: 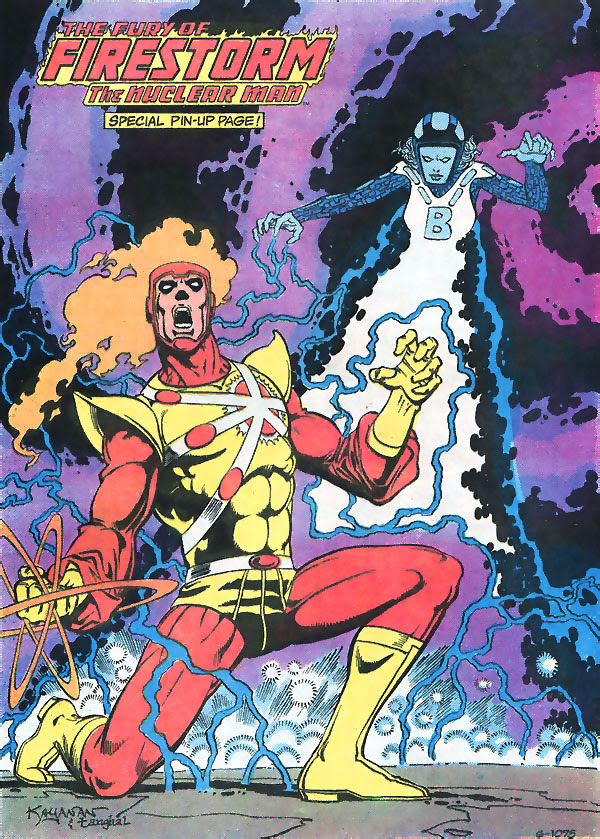 FIRESTORM FAN is a website dedicated to the first comic character I worked on back in 1983.
Working with writer/Firestorm creator Gerry Conway was so much fun. Gerry is known to have written one of the best known storylines in comics: The death of Gwen Stacy in SPIDER-MAN and created the PUNISHER character in that run as well. Another milestone was writing the very first ever meeting between Spider-Man and Superman.

Firestorm was certainly a book where I learned a lot about the creation of comics. The monthly deadlines weren't even a concern. I was having so much fun pencilling the book and couldn't believe I was working in the industry that I could pencil several pages a day. I also learned to start focusing on figure gestures better and on strengthening my storytelling. I can see how my style evolved month by month. A great on the job training ground. The inks tended to be heavy but the covers inks by the great Dick Girodano, along with a few guest inks by Romeo Tanghal were probably closest to the actual pencils I turned in. Gerry's scripts were in the old Marvel plot format and since he was also editor, he gave me a lot of leeway to mess around with the costumes.

We even did an experiment where prose was accompanied by single panel illustrations in the second Annual. Something which was quite rare in those days.

The pinup above features what could arguably be one of the first cyberpunk influenced comic characters created. Her name was Byte and her younger brother was called... Bug!

Always thought these two characters had potential to be explored further, especially these days when the general public knows way more about computers than the ancient days of 1984.

Gerry also has a great audio interview featured on here. He eventually returned to comics after a very successful run in TV shows such as Law & Order working both as writer and co-executive producer.
Posted by Rafael Kayanan at 11:03 AM 5 comments:

Artist Whilce Portacio asked me to contribute to RENAISSANCE, which features the works of Filipino artists from various visual arts such as comics, videos, film and animation. Talents such as Leinil Yu, Gerry Alanguilan, Philip Tan, and the Luna Brothers are featured. Renaissance is coming from by Anvil Publishing, Inc. and proceeds go to benefit the victims devastated by the flood in the Philippines.

All the original art in this book is going to be auctioned off at EBAY, the profits of which will also go to charity to benefit.
Stay tuned for that announcement.